After a continuous snowfall of three days in Manali the temperature has dropped down to a substantial level, below 0.4 degrees almost, Because of the snowfall last week, right now the whole area of this wonderful tourist destination is wrapped with snow. However, in spite of the cold, the enthusiasm of the tourists is never-ending. The Statement From the Weather Experts:

According to the meteorological office confirmed that a number of places in Manali stayed below the freezing point for the last few days and the temperature is unlikely to increase in the coming days. They also added that on November 24th

Advertisement
again there are chances for snowfall. Therefore, the temperature is likely to decrease more after that.

The temperature had reached its lowest ebb on Keylong, which happens to be the Lahaul Spiti district headquarter. There the cold is as low as -7.7 degrees Celsius. The whole area is now covered with complete snow and the local inhabitants are on the work to remove the snow from the roads so that the transport system can resume.

In Kalpa, which is a part of the Kinnaur district, the temperature had reached as low as – 2 degrees Celsius and in Manali, the maximum temperature was -0.4 degrees Celsius. In both of the regions, there had been problems in traffic condition because of the snowfall.

Simla reached a low temperature of 6.1 degrees Celsius while Dharamsala was 7.8 degrees Celsius. On average the cold was extreme and in spite of that, the tourists were out to take the fun of the weather. One of the weathermen mentioned that post 24th November snowfall there is the high chance of snowfall in some high hilly regions of Manali and that would further increase the disturbances on the western part. The snowfall is very likely to happen on the upper reaches of the area. 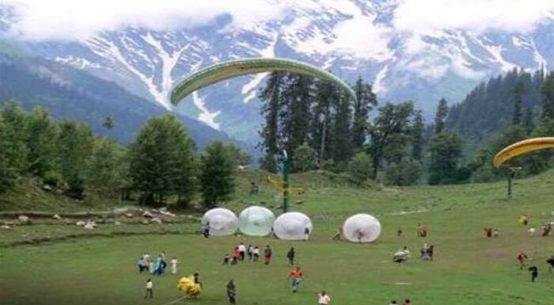